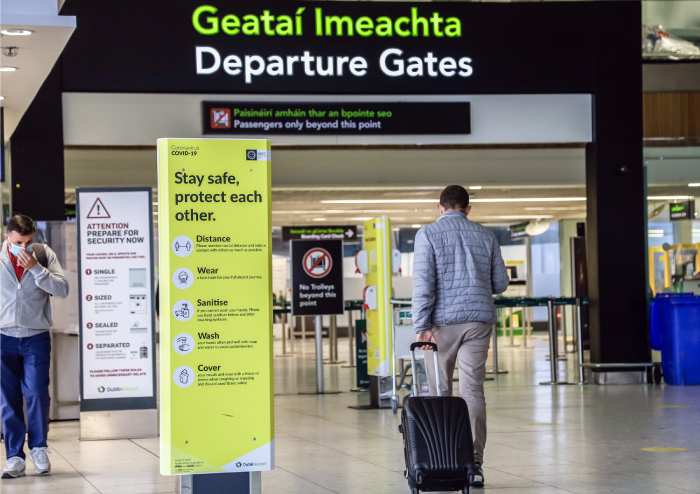 • Thank you for the invitation to discuss the extraordinary challenges which daa and the aviation sector now face as a result of Covid-19.

• As I speak to you today, I’m thinking of people like Rob Rankin from Vagabond Tours in Wicklow, who has had virtually zero revenue since March, because there have been no international visitors. I’m thinking of Stephen Teeling and his staff in Teeling’s Whiskey Distillery in the Liberties, who rely on our shops as their biggest sales outlet. I am thinking of Aaron Mansworth of Trigon Hotels in Cork who has seen occupancy plummet and one hotel close. I am thinking of the 145,000 people across the country who depend on Cork and Dublin airports for their livelihoods and the 750 people that are leaving our company because we don’t have work for them due to the loss of air traffic.

• As one of the most open economies in the world, our country is hugely dependant on Foreign Direct Investment, exports and tourism and on the air travel that keeps us connected to those global markets.

• Dublin and Cork airports have been engines of the Irish economy, but now they’re running on empty. In total our airports have already lost 20m passengers compared to 2019; Dublin Airport will have fewer than 9 million passengers this year – that means we’re back at 1995 levels. We’ve lost 25 years of growth.

• Our sector has been demonised since this pandemic began. Other key sectors have been allowed to re-open with the understanding and acceptance that there is an element of risk involved. The Irish aviation sector, however, is being held to a much higher and, quite frankly, unreasonable standard, with continued constraints being placed on opening up international travel. Because of this, Ireland’s connectivity to the world is faltering.

• It’s dangerous for anyone to assume that routes withdrawn in the last six months will simply re-emerge overnight. In football terms, we hauled ourselves into the Premiership over the last 2 to 3 years, but we’ve just been relegated again. Last week American Airlines withdrew a Dallas flight from Dublin – this means that for the first time in 10 years, they will not have a presence in Ireland this coming winter. Such connectivity once lost, is incredibly difficult to re-establish. It can take up to four years intensive effort to win a route, particularly a strategic long-haul route. We can be competing against 10 to 15 cities worldwide to get a single aircraft allocated to one of our airports. To win, we must build a compelling business case and engage with tourism bodies, economic development agencies, transport regulators and overseas diplomats from both sides.

• Industry sources are suggesting it could be 2024 or beyond before we see a recovery in the sector, so re-building lost business will take years – but first we need help to stop the decline. Failure to act now by substantially easing the travel restrictions will prolong the disruption and decline in connectivity into 2021, with significant financial consequences.

• The collapse of the aviation sector has meant our liquidity has already been depleted. We have accumulated more than €150 million in losses since the pandemic began and our net debt will have doubled by the end of 2020.

• Dublin Airport was the State’s largest gateway pre-Covid and has suffered more than any other airport due to the collapse in passenger traffic. As the key gateway to the country, it will need significant financial support to re-build.

• Cork Airport was Ireland’s fastest growing airport in 2019 and was on course to be so again in 2020. Instead, over half of its airlines have withdrawn, traffic is down 90% and it is facing into losses of €20 million this year. In stark contrast to its other regional airport peers, Cork has received no direct State funding to date and now requires specific provisions, including access to the Regional Airport OpEx and Capital Funding Programmes.

• Ireland has continued to operate one of the most cautious travel policies in the EU. There has been minimal movement on the European Commission’s recommendations in relation to the easing of travel restrictions published in May, or on the recommendations of the Government’s Aviation Recovery Taskforce published in July. In the meantime, the aviation, tourism and hospitality sectors have suffered untold damage.

• I therefore strongly welcome the recent announcement that the Government is now seeking to align with the European Commission’s plans for co-ordinating travel, due to come into effect next week. This new Traffic Light system needs to be accompanied by testing protocols for high risk ‘red list’ regions, discarding blunt travel restrictions and quarantines. The proposed framework has been supported by the European Centre for Disease Control and by airlines, airports, member associations and tourism bodies right across Europe.

• To facilitate the adoption of the EU framework, daa has undertaken significant research and engaged with the market and Government agencies. We have developed proposals to facilitate mobilising pre-departure PCR testing at Dublin/Cork airports by mid-October with capability to deliver up to 15,000 tests per day as business recovers, without impacting the public health system. Growing evidence from countries like France show that pre-departure testing reduces importation by over 80%.

• Ultimately however, Government needs to approve a rapid turnaround, low cost, scalable testing solution for use in Irish airports so that we can move quickly as the market introduces products better suited to airport operations, for example LAMP or antigen testing. In doing so it will allow work to begin on re-connecting Ireland to the world and on re-building the businesses and livelihoods that depend on that connectivity.