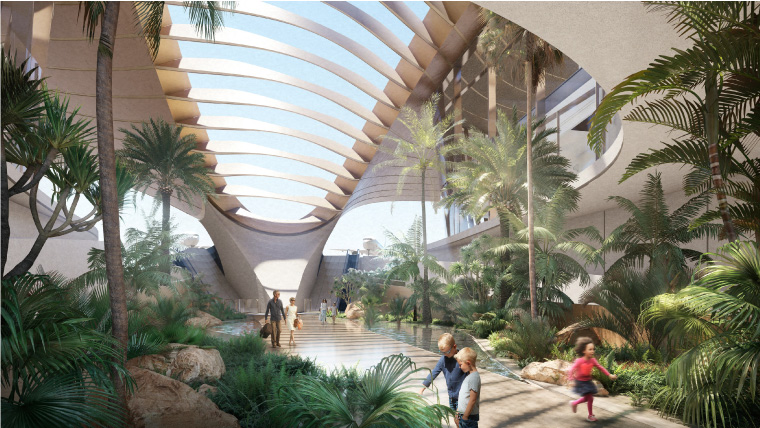 daa International has signed a contract to operate the new airport at The Red Sea Development Project in Saudi Arabia.

The Red Sea Project is a major development being built over 28,000 square kilometres on Saudi Arabia’s west coast to create a new luxury tourism destination. The first phase of the project, including the new international airport, is due to be completed by the end of next year. The Red Sea Development Company (TRSDC), which is the developer behind the new tourism destination, has named daa International as the operator of the new airport, which will be the main gateway for the development.

daa International, which is a subsidiary of Dublin and Cork airports operator daa, has a successful track record in Saudi Arabia, having operated Terminal 5 at King Khalid International Airport in Riyadh, since it opened in 2016.

“Our state-of-the-art airport will provide a unique gateway for guests arriving at our destination, and this announcement is an important step in bringing the experience to life, ahead of welcoming visitors by the end of 2022,” said John Pagano, Chief Executive of TRSDC. “daa International was selected because we are confident that they can deliver not only an airport experience worthy of our luxury destination, but for their commitment to ensuring our sustainability goals are met,” Mr Pagano added.

daa International Chief Executive Nick Cole said the company was delighted to have been awarded the contract to operate the new airport. “The Red Sea Project is an amazing development and we are thrilled to be playing a major part in it by becoming the operator of the new airport,” he added.

“The Red Sea International Airport will become a fundamental part of each visitor’s journey to this unique destination, and we believe their holiday experience should start from the moment they land,” according to Mr Cole. “We intend to deliver a seamless airport experience for passengers, underpinned by a commitment to achieving the development company’s stringent sustainability goals.”

daa International will manage the operations of the airport during three separate stages. Stage one will involve ensuring that all airport designs benefit the customer. Stage two covers planning a full and seamless operational model for the airport when it opens to the public. The final stage will be to manage and operate this plan, maintaining the highest standards in customer experience and sustainability, while prioritising safety and security.

The Red Sea International Airport is set to serve one million passengers annually by the project’s completion in 2030, with a peak capacity of 900 passengers per hour. Visitor numbers will be limited to one million, based on the environmental carrying capacity of the new Red Sea development. The airport will be powered by 100% renewable energy.

The airport is being designed by international architecture firm Foster + Partners, which has taken its inspiration from the local landscape. The terminal building has been inspired by the forms of the desert, the green oasis, and the sea, and aims to provide a tranquil and memorable experience for passengers from the moment they arrive.

The roof shells are inspired by the desert dunes and will provide natural shade to passengers in both landside and airside areas. By creating small more intimate spaces that feel luxurious and personalised, the design of the terminal building also aims to bring the experience of a private aircraft terminal to every passenger. An internal green oasis with a garden has been designed to create a relaxed, resort-like atmosphere within the airport terminal. Construction of a new runway, seaplane runway, taxiways, helipads and a road network for the airport is also well underway at the site.

On completion in 2030, The Red Sea Project will comprise 50 hotels, offering up to 8,000 hotel rooms and around 1,300 residential properties across 22 islands and six inland sites. The destination will also include a luxury marina, entertainment and leisure facilities. The first phase of the project, scheduled for completion in 2022, will include the new airport, up to 3,000 hotel rooms, recreational facilities and residential properties.

daa International
daa International is part of daa, which operates and manages airports, and travel retail businesses in 16 countries. daa International offers advisory, management and investment services to clients globally. daa owns and operates Dublin and Cork airports in Ireland, holds a 20% stake in Düsseldorf Airport in Germany and an 11% stake in Hermes Airports, which operates Larnaca and Paphos airports in Cyprus. The group’s travel retail business ARI has operations in 13 countries, including Ireland, India, Cyprus, Canada, Saudi Arabia, Lebanon and Bahrain. daa manages or holds stakes in airports that handled almost 87 million passengers in 2019. Almost 185 million people passed through airports in which daa group has a retail presence during the same year.

The Red Sea Development Company
The Red Sea Development Company (TRSDC) is a closed joint-stock company wholly owned by the Public Investment Fund of Saudi Arabia. TRSDC was established to drive the development of The Red Sea Project, a luxury, regenerative tourism destination that will set new standards in sustainable development and position Saudi Arabia on the global tourism map. The project is being developed over 28,000 km2 of pristine lands and waters along Saudi Arabia’s west coast and includes a vast archipelago of more than 90 pristine islands. The destination also features mountain canyons, dormant volcanoes, and ancient cultural and heritage sites. The destination will include hotels, residential properties, leisure, commercial and entertainment amenities, as well as supporting infrastructure that emphasizes renewable energy and water conservation and re-use.